Whenever I see and old truck still chugging along it gives me hope for truck 1.0

I was having some trouble with the truck not wanting to start, which I suspected was due to a fuel or air leak. I took it to Bodacious Diesel in Golden, Colorado and sure enough the fuel system was leaking in three places near the filter housing. It also needed brake work on three wheels, steering work, and front suspension work.

I thought about just donating the old truck and getting a new one, but Jeremiah said there was nothing wrong with the 5.9 liter, 12-valve engine that some new components would not fix. He explained that the fuel system was not delivering enough fuel (low pressure at the lift pump, worn out injectors, etc) and the stock turbo is too small to really pack enough air in the cylinders. Part of that is age (24 years) and part of that was the very de-rated nature of the 5.9 all those years ago. Since fixing the current truck is about $30,000 less than getting a new one I went with the repair idea (really hoping that wasn’t my second-best choice).

That didn’t stop me from looking at new trucks though. I test drove a 4×4 Ram 3500 dually (diesel) and a 4×4 F-250 crew cab (gas). Both of them rode like a truck; bouncing down the road the same as my current truck. I had hoped suspension technology had improved to the point where a 3/4 ton or 1-ton truck could ride like a 1/2 ton, but no.

The regular cab Ram and the crew cab Ford both had the same apparent turning radius as current truck so no difference there either. The Ram is about the same height off the ground as current truck though the F-250 is much taller. The gas Ford was very quiet with no load though when towing the forums often say stuff like “the motor screams (diesel guys)” or “the motor sounds like a mustang (car guys)”. The 6.2L’s peak HP is at 4500 rpm so for diesel peeps that’s screaming. There are also opinions about it hunting/shifting, but guys who run in manual mode say that solves it. Maybe if I really need 4×4 in the future I’ll have to pony up the dough.

The current/ repaired truck will have a new and bigger turbo (58mm vs 35 mm), a FASS fuel system from the tank to the injector pump, a performance attitude adjustment system in the injector pump to increase fuel-flow, new and bigger injectors (50 HP more), and a new bigger exhaust system to get all that money out the tail pipe. Jeremiah promised that it will pull better than the 6.2L Ford and he said I could have it back tomorrow (7-working days after I dropped it off). 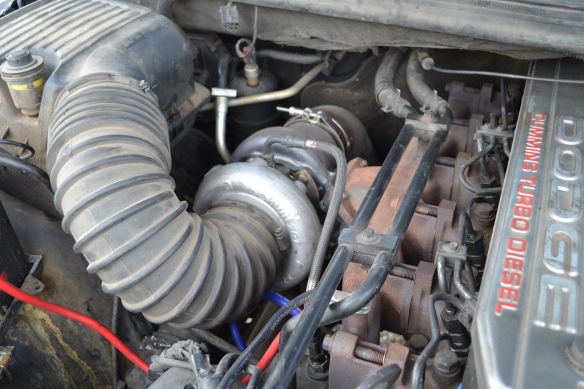 I’m really hoping I didn’t just go all sunk cost fallacy with this whole shebang so stay tuned to see what tomorrow brings!

(scene: The setting sun is bottom-lighting the clouds. Orange glow on the eastern horizon fading to pink, to gray, to black … )

(scene: The mid-day sun is beating down on the parched earth. Even the shadows are hiding under trees trying to escape the unrelenting rays of the sun.

While Jeremiah was figuring up my total bill Sean took me for a tour of the truck version 2.0. Sean had tuned the truck to run well and not smoke too much. I’m not a fan of smoke and that was something we talked about before they set it up. The attitude adjuster has a dial in the cab which changes the amount of fuel the injector pump draws on each stroke. More fuel, more air, more heat, more go.

And more go it does! There is an on-ramp to the highway where I normally would get up to 60 before merging with traffic so to test the unloaded truck 2.0 I floored it when the light turned green and was heading north of 80 mph before I took my foot off the fuel control pedal.

A few things I noticed right away were the high-pitch high-speed pump sound the new FASS pump makes. It flows a ton of fuel to feed the thirstier injection pump and the bigger injectors, but it is audible in the cab at less than highway speeds. Once we’re going 60-ish the wind noise and all the other diesel truck going down the highway sounds cover up the pump sound. The new injectors don’t leak fuel so when I take my foot off the fuel control pedal the rpm’s drop fast. I’m learning how to shift all over again. Also I have to be careful not to floor it anymore because it will spin the tires on the unloaded truck 2.0

Towing Road Test with about 8,700 pounds of trailer

From a standing start at the bottom of the on-ramp we were doing 60 at the top. If there hadn’t been so much traffic I could have been going even faster at the merge point.

It seems that at highway speed – for me that’s about 64 mph (1800 rpm) – the pedal is only half way to the floor instead of the 3/4 to 7/8 it use to be. Everything spools up and revs up faster than it use to. On hills where I had to floor it just to keep some speed now the cruise control just handles it. If I use the fuel control pedal I tend to speed. It is a huge improvement!

I found some instructions for the attitude adjuster online (it didn’t come with any) and the instructions say 4 (middle of the range from 1-8) is best for towing. That’s 200 hp. The 8.5 setting puts out 395 hp.

Next week we head into the mountains west of Fort Collins and take on some mountain passes. Stay tuned!